Chance of some silverware on Sunday for the Town 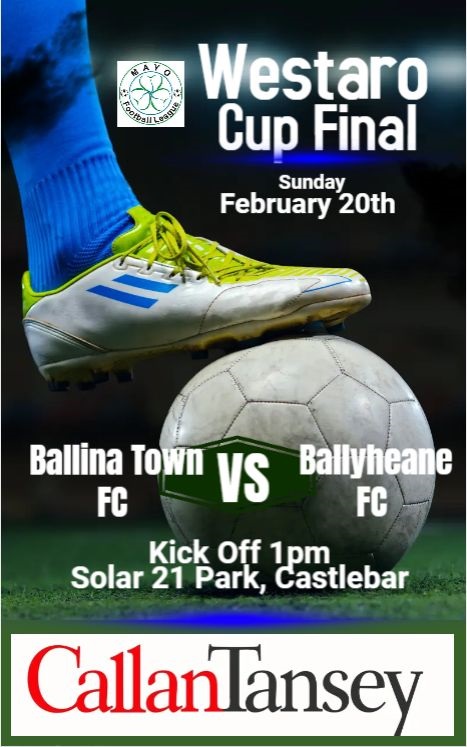 Sunday next, February 20th, gives Town the chance of some silverware to conclude the 2021 season as they face Ballyheane in the Westaro Cup final at Solar 21 Park, Milebush, Castlebar.
Ballyheane won the Super League ahead of the Town last season and in fact were the only team to beat Ballina in the league – and that came in the very first game of the campaign in Belleek. The ‘Heane went on to win a first ever Super League title and still have the Calor Gas Super Cup decider to come against Westport United as they hope to complete a remarkable treble.
Town’s challenge on Sunday is big, then, but when the sides last met – in a Super League clash in November – they gave as good as they got. That game in Pat Quigley Park ended in a 1-1 draw, Dylan McKee on target for the Town after soon after Jack Tuffy had put the home side ahead.
The draw prevented Ballyheane from claiming the title that November day and on Sunday next, Town will be hoping to bring an end to their opponents’ treble hopes.
It has all the ingredients to be a cracker between two of the best teams locally. Your support for the Town on Sunday would be hugely appreciated. Kick-off is at 1 pm. CTT!